Sunshine on my shoulders makes me happy . . .

Today was a long day. I believe that waking up on the wrong side of the bed is a very real thing, and if you go back to sleep for a quick power nap, your bed can turn right around so that you wake up on the RIGHT side.

Church was long, and not your, my kids won't hold still and are tired and hungry, kind of long. They were actually VERY good today, which was an answer to prayer because we have really been working on reverence the last few weeks. Today was long because at church, I am now in charge of teaching the 3 and 4-year-olds in their primary class. This is Lydia's class, and there are 10 of them that consistently come. Today was my first week. Prior to this, I volunteered at the church by planning monthly activities for the women of our church. I LOVED it. Though hectic, it was the most fun I have ever had serving in the church. Last week they asked me to teach in Primary. I said yes- then that's when they told me they wouldn't need me to plan these activities anymore. Some people say that planning the activities would be very hard. For me, teaching 3 year olds is like trying to climb Mount Everest. Isn't it interesting how innocent children humble us? I feel very inadequate after today. It's one of those things where I don't even feel like I'm that great at teaching my own children reverence, yet alone 10 little ones that synergize their energy and want to jump up and down and run and wiggle and stand on chairs and lay on the floor and pick their noses and tell me everything that happened at dinner last night. This will be a challenge. This will take faith. And I suppose this is what the Lord wants me to learn right now. And maybe if I am lucky, 10 little 3-year-olds will get something out of it too.
Posted by Heather at 9:11 PM 9 comments:

The Lord's Hand in our Lives

Today I have seen things that I believe are the hand of the Lord, helping me on my way, letting me know that He is there and aware of me.

Lydia counted to 10 by herself for the first time!

I was looking for a book for Lydia in the library, but couldn't find it. I decided to stroll through the storybook bags which I have never done before. One of the first bags I looked at, had the book I was looking for, with a fun hand puppet.

I wanted to find a gift for my brother and sister-in-law, but was afraid I would have a hard time finding what I wanted. I almost immediately found what I was looking for and at a great price!

We have a loving Heavenly Father. I like putting my faith in Him. Things seem to work out better that way.
Posted by Heather at 2:50 PM No comments:

The necessary pole for the kite has been found! It was stuck to the cabinet door underneath the sink. Never would have looked there. Regrettably, the kite never flew. I took the kids to the soccer fields, but after 20 minutes of attempting, whirling and nosediving, and running across the field after the kite a few times, the kite was ripped in two! I think I was the most disappointed in it. Lydia was happy to take pictures with my camera and Colton had found a low spot in the field where he could happily play in the mud. Go figure.

Colton helped me weed the garden. All the weeds that were pulled from their vegetable garden home were then taken over and dumped in the flower garden by those loving little hands.

Lydia was asked today if she was going to make a lot of money when her dad finished school. Her reply- "No. We'll make muffins." (I was at the time making muffins.)

I've determined that the joy in many things come from the anticipation of it. Christmas is fun, but most of the fun is all the stuff before- carols, wrapping presents, making candy and dreaming of the cool gifts Santa will bring. I always anticipated school- new clothes, new school supplies, friends to hang out with. Well, I am anticipating some fun events. Every year Purdue hosts concerts and welcomes talent in various areas. A few months back, Lady Gaga was here. This year, Bill Cosby is coming in September and The Blue Man Group is coming in March and I get to see both of them! I am SO SO excited, and I am glad these events aren't for awhile so I can anticipate them. I just have to make sure I don't over-do it so that I'm not dissapointed when they come. Whhooo-hooo. I like this college town!
Posted by Heather at 2:42 PM No comments: 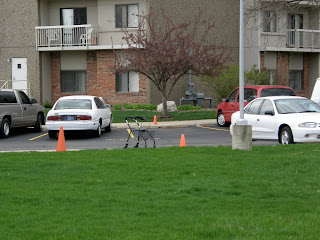 I took the kids on a bike ride and we passed this in the parking lot of an assisted living home. Is it just me, or is that funny? Perhaps when I reach my golden years, I will paint racing stripes on my walker.
Posted by Heather at 10:54 PM 1 comment: I let the kids play in the puddles right before bathtime. It was fun. 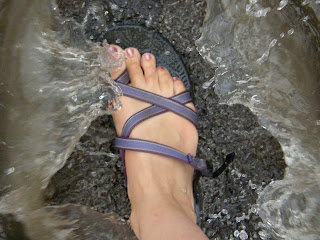 I got this great picture during our puddle jumping. No editing. 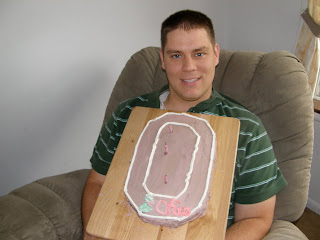 The cake, with candles strategically placed by Lydia. 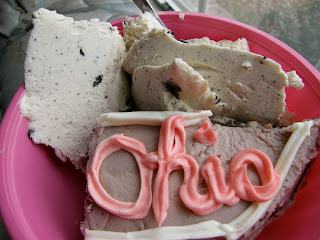 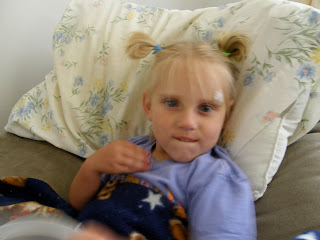 It's been an interesting weekend. We bought a kite because the weather was no good for anything else, but before we could take it outside, the main support pole was 'lost' and has still not been found. No kite flying for us. Instead, we celebrated Mike's birthday. I've decided I want to make 'cool' cakes for birthdays and this was my maiden voyage. I couldn't quite get the coloring for the frosting right, but Mike didn't mind that instead of scarlet and gray his cake was purple and pink. It tasted good and I had fun, so in the end, it all turned out really well- except for the fact that Lydia told Mike what all his gifts were before he could open them. ;)

Mike's birthday is tomorrow, which means its time to renew his license. If only he could pass his written test. The poor boy didn't study at all. Naturally, he went in there like all licensed drivers with an air of "I've been driving for over a decade. I think I know what I'm doing." They had questions on the test asking what the different shapes of street signs mean. ex- a circle is a R&R crossing, a square is information etc. He missed three of these. You can only miss two. Looks like he will be taking that one again.

We found the all time boringest movie ever made. "Where the Wild Things Are." Two thumbs down. At least I was making a booklet for the kids while I watched it, so it wasn't a total waste of time.

And of course there was Mother's day. All started out well. I got to sleep in until 8:30! Wahoo. I came down the stairs rested. The first thing I saw was that Mike had fallen asleep on the couch. The second thing I saw was half eaten oreo's all over the floor and a little boy with a brown face. The third thing I saw was a little girl making "Dish soap pancakes" all over the kitchen floor. Due to my well rested state, I found these things humorous. They were cleaned up, and punishments were administered. Now, to get ready for church. I was crouched by the TV and had just started standing up when Lydia decided to lean on me. Because these things happened simultaneously, there was nothing but the TV for Lydia to lean on, and the TV is not so soft as Mom. Lydia hit the corner right above her eye. My morning plans just changed. Wiping blood, and calming fears, we ended up in the Emergency room. Thankfully, glue was able to pull together Lydia's cut instead of stitches. They put a few butterfly like things on and we were back home in time to still catch most of church. Lydia shared all the stickers she got from the ER with her primary class, adorning her shoes with the two that she retained for herself. She even gave her first talk today. I don't think anyone understood a word besides 'Jesus', but hopefully she learned something about repentance in preparation.
Posted by Heather at 10:29 PM 3 comments: 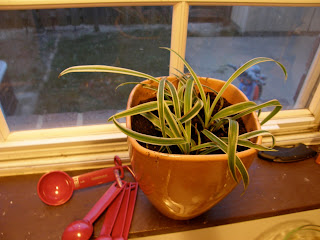 Some things I have been happy about lately. This plant that I potted from Mike's mom. I like planting things. It's fun. I am also happy about these measuring spoons. Somehow, the set I had, had dwindled down to a 1/2 tsp and smaller, nothing larger. It was getting really old measuring 6, 1/2 tsp every time I needed a Tablespoon! I like that they are red too. I think I will start decorating my kitchen in red. 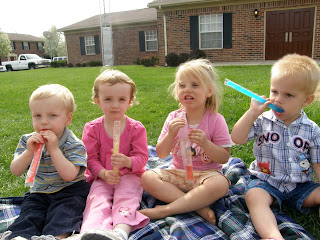 I'm happy it is popsicle season again. It's so fun to share a refreshing popsicle with friends.

I am happy my little sister got asked to commencement by a nice guy she is excited to go with.

I am happy I finally got the kids pictures taken at a studio. I love seeing their smiling faces all the time on my wall.

I am happy I found the title to our car.

I am not so happy, but it was funny . . . on our anniversary I ended up jumping out of the shower to fan the smoke alarm that was blaring while our 'special breakfast' burnt! Along with this, our 'romantic' lunch was accompanied by 3 children and ended with Colton mopping up his soda with his shirt and pants- in the busiest walkway of the restaurant. (Which was Fiesta Mexican Grill by the way!)

I am not so happy because I put my kiddo's to bed an hour ago and I just heard some bed jumping! I'm off to settle down my happy little monkeys. But they do have a happy and blessed Mama. Life is good.
Posted by Heather at 8:34 PM 1 comment: 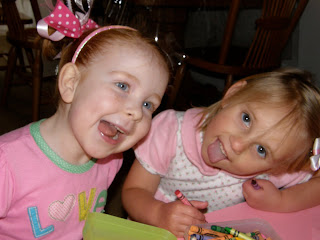 We had a slow day a few weeks back, so we decided to have a pink party. I wish I had had more time to make cute pink invitations and get pink balloon and the whole works, but Lydia was anxious to make a cake and have friends over, so we called it simple and made a cake, wrote our invites on pink construction paper and read the book "Pinkalicious." 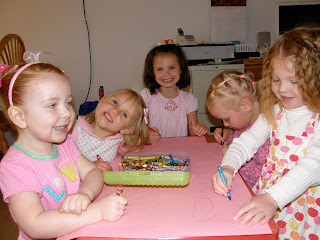 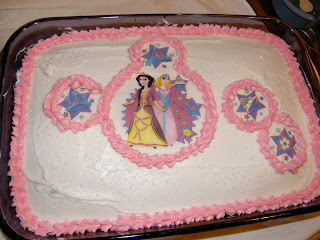 The cake. I broke down and bought bags and couplers to go with my cake decorating tips. It is amazing how much easier it is to do a job when you have the right tools! Before I would put the tip in the corner of a ziploc baggie and it was always a mess. I really enjoyed piping the pink border. It was relaxing. I hope I can keep playing around and enjoy this as a new hobby. Mike's birthday is coming up, so I'll get some practice!
Posted by Heather at 8:13 PM No comments: 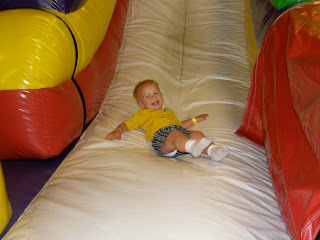 Over the last week we went to a jump house and a gymnastic gym. Colton loved the slide! He would climb up all by himself. By the end of the night, he was exhausted and so starving that he was trying to eat cold pizza off of stranger's abandoned plates. 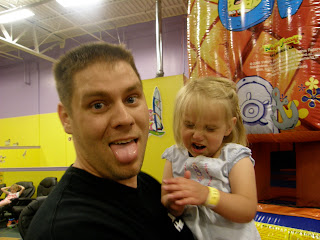 A not so fun moment for Lydia after she fell off one of the bouncing toys. Other than this moment, it was all giggles, running and jumping! 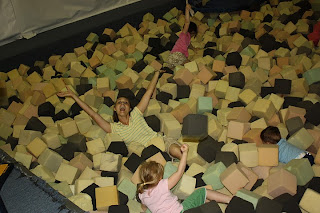 They gym we went to has this big pit. It's quite fun to jump into, but now I understand why "Gladiator" was so hard. It's quite a bit of work to get out of that! 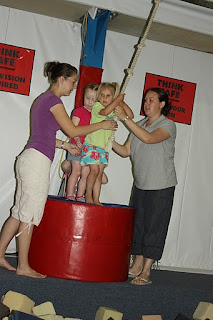 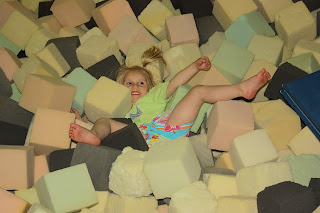 The result of the rope swing! So fun!
Posted by Heather at 8:07 PM 2 comments: